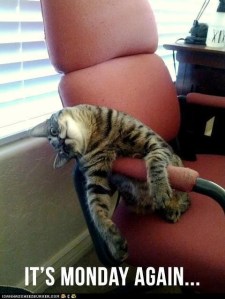 Hello, world! I feel like I’ve been living under a rock. 😆 And contrary to popular belief, there is nothing easy about Monday, or my upcoming schedule. Here’s the rundown.

Writing: Turned in the rewrite/revisions of THE COWGIRL’S LITTLE SECRET a day early to Mr. HEd in NY. Turned in final draft of BLUE MOON to my CP, beta reader, and continuity editor. Keep your fingers crossed that I get everything done and it goes up on Amazon by October 15th. Be sure to stop in tomorrow for the cover reveal and Wednesday for some snippets.

Appearances: Got swag and books ordered for the book signing I’m doing at the library in my hometown. I’ll be there on November 1st as a featured author. 🙂

Productivity: I got a little laundry done but most of my weekend was spent making a Snoopy costume for Sprout. The Only wore a Snoopy costume for her first Halloween–also homemade by me. Only wanted to keep the tradition going. 😀 Mainly, I watched college football–the REAL OSU won! But OU lost. 😦 And play-off baseball. My Cards split 1-1 with the Dodgers in LA and they play the next two games at home in St. Louis tonight and tomorrow night. Here’s hoping the Cards can take two at home to move on to the next round against either the Giants or the Nationals.

Reading: I finished off an anthology–HOTTER THAN HELL–edited by Kim Harrison. That one’s been sitting on my TBR shelf for a long time. Like most anthologies, I like some of the stories better than others. I also finished up the boxed set, DARK NIGHTS, DANGEROUS MEN with books by Elisabeth Naughton, Cynthia Eden, Katie Reus, Alexandra Ivy, Laura Wright, and Joan Swan. Once again, the group was “uneven” but it was one of those 99 cent deals so I figured why not? I also read STONE COLD LOVER (Gargoyles #2) by Christine Warren, which I got from the library. I’m really trying to cut back on the ol’ book budget. Unless it’s a book from an auto-buy for me, I’m doing my best to read books from the library until I decide I want to keep a copy. I’m also trying to read one paperback from my TBR shelf, one digital from my Kindle, and if something new is out, one from the library once I come up on a waiting list. I want to clear out some of the books. The physical books I’ll either do giveaways with or take them to the VA hospital for patients and visitors.

Future writing plans–none of which are carved in stone, because…Life.

1. MOON SHOT: crossover novel with the Wolves of Moonstruck, the SEALS of the Atlantis Project (mentioned in the Moonstruck series) and some new characters, including new Wolves, who form an international rapid response terrorist unit, the Hard Target series, winter 2014/2015. With luck, it’ll be out before Christmas.

2. MOONSTRUCK: SECRETS (a compilation of BLOOD MOON and BAD MOON with added material spanning the years between the books) hopefully to release in digital AND print early 2015.

3. MOONSTRUCK: LIES (HUNTER’S MOON and WOLF MOON with added material cut from both books before publication), digital and print, spring 2015

5. MOONSTRUCK: RETRIBUTION (BLUE MOON and MOON SHORT, with the full story, and probably CHRISTMAS MOON as a bonus), digital and print, fall 2015

6. THE DEVIL’S CUT (Penumbra #2): Caleb’s story, but with cameos from your favorites from the other books–Sade, Sinjen, Roman, Nikos and others, digital and print, early winter, 2015

7. THE NIGHTRIDERS: not quite sure how I’m going to do this series, but they are rogue Wolves and members of a motorcycle club. 2015.

Plus I’ll have at least two Harlequin books releasing–January and April, and hopefully one or two more. Still waiting to hear on the proposals I submitted. Those contracts will determine the exact timing of my self-pubs.

So, that catches y’all up on my life. Now I want to know what y’all have been up to since I’ve been hibernating!

I like walks on the wild side and coffee. Lots of coffee. Warning: My Muse runs with scissors. Author of several award-winning series--Moonstruck, Nightriders MC, The Penumbra Papers, and Red Dirt Royalty (Harlequin Desire) & other books! Purveyor of magic, mystery, mayhem and romance. Lots and lots of romance.
View all posts by Silver James →
This entry was posted in Writing Life and tagged books, business, fun travel and adventure, herding cats, Monday, Moonstruck, Penumbra, reading, stuff, writing. Bookmark the permalink.