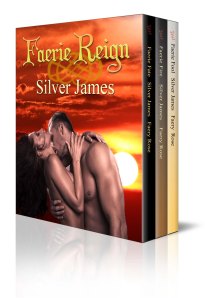 Three couples torn apart by the Fae and then offered a second chance in a different lifetime. All they have to do is find each other again and repeat the binding vow. Not so easy when the King of Tir Nan Óg, the fae Land of the Ever Young, is feuding with the fae Harper. Just remember, without the words, history is doomed to repeat itself.

All three books in the Faerie Reign trilogy are available as a digital boxed set at a special price. Save money by buying them all together. 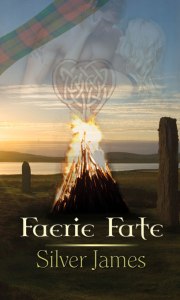 If you could go back, do it over again, would you take a chance to find true love? What if you had no choice? In the first book of the trilogy, two humans find out.

On her fiftieth birthday, the faerie catapult Rebecca Miller a thousand years into the past to find her happily ever after with Ciaran MacDermot, Chief of Clann MacDermot, the last Fenian warrior in his line. In the twenty-first century, Becca is old enough to be Ciaran’s mother. In the tenth, she’s young enough to be his bride.

The fae forgot to mention one slight stipulation. The lovers must be bound before the Festival of Light, or Becca will forever disappear into Tir Nan Óg, the faerie Land of the Ever Young. Will they discover the binding words before time runs out and they’re torn apart forever? Or will their eternal love defeat their Faerie Fate?

Without the words, history is doomed to repeat itself.

In this second book, the feud between the two faeries, Manannan Mac Lir and Abhean the Harper, which has simmered throughout time, finally bubbles over. Continuing the theme of reincarnation and chances missed in the past affecting the present, Faerie Fire introduces new characters, descendants of the families first met in Faerie Fate.

When Moira O’Connor first touches SAS Captain Duncan Ross time turns topsy-turvy. She recalls memories of a former life, one in which Duncan was her lover—one in which he arrived too late to save Moira’s life as she was burned for a witch.

In their present life, while Duncan faces his own demons, he must save Moira from the Irish terrorist threatening her father, a US Senator. This time he’s determined to save the woman he loves, even if he must sacrifice his life for hers. Will Duncan and Moira survive to say the vows, binding their lives for all eternity?

On Midsummer’s Eve, when the veil between the realms thins, will faerie magic work miracles or will the lovers succumb to Faerie Fire? Without the words, history is doomed to repeat itself.

If you had one shot—just one chance to seize everything you ever wanted in one defining moment, would you capture it or let it go?

In a previous life long forgotten, Rory MacDermot vowed never to lose his heart. But then he meets Delaney Burns. Again.

In life after life, the man Rory was slips beyond Delaney’s grasp, and she falls for the wrong man. This time, Delaney turns to Rory for solace and discovers she’s loved him in every lifetime. So why the barriers between them?

Neither believes in reincarnation, but as their dreams reveal the past, they realize their memories hold the key to the future. To keep history from repeating itself, they must pronounce the binding words before the Faerie feud spills into the mortal realm, but the words dance beyond Rory’s memory.

When the fae harper arrives to collect Rory’s old debt—his life for Delaney’s—he’s dragged to Faerie, leaving Delaney the hostage of a disturbed man. Can Rory escape and save her? Or will he lose her…this time forever? Without the words, history is doomed to repeat itself.

This is the final story in the Faerie Reign series. You can get the first three books individually in digital or trade paperback, or a boxed set at a special price for the digital version. In this final story, Abhean, Tir Nan Óg’s resident troublemaker gets his.

Abhean, the fae Harper, is exiled to the mortal realm until he finds the other half of his heart. As Venn McLyre, the NYC street musician, he has no memory of his true nature—or his magic. When he steps in to save reluctant bride, Gwyneth Riley, he could lose more than his heart—he could lose his immortality.

Socialite Gwyn Riley is resigned to marrying Sumner Barrett, son of her mother’s best friend. A marriage based on duty to family and convenience, she has no pretensions about love. It takes the magic touch of a poor musician to open her heart to the possibilities. When three couples arrive to remind Venn of his identity, he has only moments to stop Gwyn’s wedding. Is he too late, or will the King of Tir Nan Óg step in to grant Abhean and Gywn their own happy ever after?

Abigail Whitlock will do anything to make it home to Seven Swans in time for Christmas even if it means braving unforgiving mountainous terrain, fickle winter weather, and a captivating escort who threatens to steal her heart.Country and duty come before all else for Major Evander Holt. He’s scheduled to arrive at his new assignment by year’s end, but there’s something about Abigail he can’t resist…even if it means risking his career.

A Case for Calamity by Mackenzie Crowne

Jane Whitmore switched identities with her best friend. But when the romantic night she spent with Gabe Sutton means he’s about to be a father, the truth of her identity is just another calamity Jane would rather avoid. When Gabe finally finds Jane and learns the truth, his belief in happily-ever-after staggers under the weight of her deception. Should he fight her for custody of his future child or cling to the promise of true love?

Abhean, the fae harper, is exiled to the mortal realm until he finds the other half of his heart. As Venn McLyre, the NYC street musician, he has no memory of his true nature—or his magic. When he steps in to save reluctant bride, Gwyneth Riley, he could lose more than his heart—he could lose his immortality.