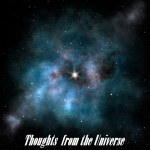 What’s that old saying about the light at the end of the tunnel?

The light is getting brighter, Silver.

The path is getting clearer.

And you are getting closer.

That’s all I’m saying,
The Universe
© http://www.tut.com ®
Actually, Silver, this has been true every day of your life, but sometimes it helps to be reminded of it. Whoohooo, you!

In this case, it wasn’t a train. It was the words THE END. Because I finally fought my way to that point through revision hell. I didn’t want to revise this particular book. Not because it didn’t need it but because I’d already revised three times and third times the charm, right? Yeah, no. Iffy, my Muse, was as sullen as a two-year-old who hasn’t had a nap in four days, didn’t want to each califlower, and whose blankie was in the washing machine. Okay, the writer was feeling some of that too. But the thing is, by the time I typed THE END, I’d rewritten, erased, revised, erased, edited–because I always have duplicate words, typos, and its when I mean it’s and vise versa. But as I got closer, as the end loomed near, there was no train whistle. Iffy was eating chocolate and flicking through pictures of bare-chested men. There are times when she’s very easy to entertain. 😉

But the thing is, even though I was sick of the story, tired of the characters, and I often walked away from the keyboard in frustration, now that I’m close–which is good because BILLIONAIRE COUNTRY has a release date of March 1, 2019–I sort of love this book. And the characters. And as my editor reminded me, this book had good bones. We sent it down the path to boot camp and now it’s in shape. I hope. What are you close to that seems just slightly out of reach?

I like walks on the wild side and coffee. Lots of coffee. Warning: My Muse runs with scissors. Author of several award-winning series--Moonstruck, Nightriders MC, The Penumbra Papers, and Red Dirt Royalty (Harlequin Desire) & other books! Purveyor of magic, mystery, mayhem and romance. Lots and lots of romance.
View all posts by Silver James →
This entry was posted in Writing Life and tagged herding cats, Iffy, inspiration, musing, Thursday Thoughts, Universe, WIPs, writing. Bookmark the permalink.