Monday Gets No Appreciation 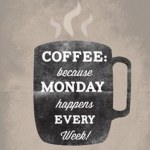 Especially not from me. 😆 But coffee? Coffee gets all the love. At least from me. So. It’s Monday. Right? *sigh* Again. Of course, with 52 Mondays a year, it’s bound to keep happening.

There was a week. And a weekend. And we’re facing a new week. Stuff happened. Other stuff didn’t happen. The end. Oh, there was some good stuff. And some bad stuff. Not terribly bad stuff, except for one “if not for bad luck, no luck at all” stuff.

Good stuff: Stormageddon hit a double in his game Saturday. 😀

Bad stuff: We weren’t at the game.

More good stuff: Only is cleared for vacation time so she’s going to New York City with me in July. Woot! 🎊 (that’s a confetti ball, FYI)

And in the bad/no luck category: The center diamond on my engagement ring went AWOL. I have no clue where or when exactly. I just noticed it this afternoon when one of the prongs caught on my shirt. Not only is this bad, it’s give me a big ol’ sad. 😒 😥

In other news, my Cards are playing better. Live PD was awesome but they’re taking the next two weekends off. Time to catch up on episodes I missed. I finished relistening/listening to Christine Feehan’s Shadow series. The newest release, SHADOW WARRIOR, was okay. Not sure what I’m going to listen to next. I really need to focus on words. Loki and Jake are cute and awesome, in that order. Boone and Adidas remain mellow. And that’s pretty much my life in 300 words or less. How was your week/weekend? Looking forward to anything coming up this week?

I like walks on the wild side and coffee. Lots of coffee. Warning: My Muse runs with scissors. Author of several award-winning series--Moonstruck, Nightriders MC, The Penumbra Papers, and Red Dirt Royalty (Harlequin Desire) & other books! Purveyor of magic, mystery, mayhem and romance. Lots and lots of romance.
View all posts by Silver James →
This entry was posted in Writing Life and tagged coffee, critters, family, follow up, fun stuff, herding cats, Monday, procrastination, reading, sports, stuff, TV, WIPs, writing. Bookmark the permalink.

4 Responses to Monday Gets No Appreciation