Another Monday in the New Normal 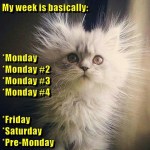 And time moves on. Again, other than the weirdness of life on lockdown, my life isn’t that much different. No complaints. Except I do seem to be losing track of which day of the week it is a bit more. Ah well.

So, life in the new normal. Things happened last week. Mostly boring things but things. We lost our fiber optic line. That meant no TV. No landline phone. No Wifi (so no internet!). It was AWFUL! Yeah, yeah. First world problems, but dammit! I had to watch Live PD livestreaming on my phone Friday night. It was down for just over 24 hours. My data plan on the cell phones is shot to $h!+. Oh well.

Yesterday was the 25th anniversary of the Murrah Bombing (aka the Oklahoma City Bombing). Always a bad period for me. Stupid PTSD. Normally, when I wake up and get up to let the dogs out, I’m up. Can’t go back to sleep for love nor money. Yesterday? Up at 6, dealt with dogs and cat, then crawled back into bed and did fall back asleep until 11 a.m. 😲 Sadly, I woke up with a sleep headache and I’m still tired. Haven’t watched much TV and have avoided the news. Whatever.

In other, more interesting news, The Masked Singer didn’t unveil anyone on Wednesday but man-oh-man did the singers come out singing! The final 7 did two songs each in a “sing-along” complete with lyrics on the screen for the home audience, who was supposed to sing along, taping themselves and then posting on Twitter. Yeah. Nope. I always DVR it and watch later. The Secrets of Skinwalker Ranch is being a new obsession. Live PD as always. And The First 48 is showing new episodes. Also, Ghost Hunters is back.

Writing is…slow. A couple hundred new words here and there. Two things have diverted me from the WIPs. One is a call for submissions–contemporary or paranormal romance, short story (3K-5K words) for an anthology. I have a couple of scenes previously jotted down for a future Nightrider book that I’m considering. Also, I yanked SUPREME SACRIFICE out of the vault. It’s the first Suspense with Romantic Elements I ever wrote. It’s 25 years old and no way could I update the technology to make it contemporary and it’s not quite old enough for “historical” consideration. 😋 Anyway, I still love the characters and the story. However, the formatting is glitched due to changes in software and updates. And, I can tell it was early in my writing journey. Still, I plan to clean it up a bit and start posting chapters for a free read here on the site. Yay or nay?

Listening to Darynda Jones’s newest release, A BAD DAY FOR SUNSHINE. It’s…sort of a quirky cozy crime mystery with humor and maybe romance and a touch of the supernatural. A SMALL touch. Considering she’s known as a UF/Paranormal author, this is a detour for her, but I’m enjoying it.

It snowed last week. SNOWED, people! What is up with that?!?! This is Oklahoma. Mid-April. There’s no snow in Oklahoma! Luckily, the bluebells and the one iris I had budding survived to the cold snap. The iris bloomed this morning. It’s gorgeous. I also have small buds on one of the peonies. Crossing fingers there.

In other news, I captured Possum Blossom, the goblin kittenkat on camera. S/he is terribly shy and is close in age to Loki. I’ve tried since the first time I saw Possum to catch it. I’d totally bring it inside! I’ve added the photos below. You might need to click on them to go to the media file for a full-size version. Please note that we have a string of green LED lights on our front porch that’s on a photocell for on/off, which is why two of the pics have green tint. I did grab a pic of Possum and its mom, the little black cat, while they were eating. Possum is ALL fur.

Anyway, that’s my week. Hopefully, writing will get underway starting today. And now that the anniversary has passed, perhaps my weird sleep patterns will settle back into something a bit more normal too.

Why I call it a goblin cat

I like walks on the wild side and coffee. Lots of coffee. Warning: My Muse runs with scissors. Author of several award-winning series--Moonstruck, Nightriders MC, The Penumbra Papers, and Red Dirt Royalty (Harlequin Desire) & other books! Purveyor of magic, mystery, mayhem and romance. Lots and lots of romance.
View all posts by Silver James →
This entry was posted in Writing Life and tagged critters, follow up, herding cats, Monday, procrastination, reading, stuff, TV, WIPs, writing. Bookmark the permalink.

2 Responses to Another Monday in the New Normal