Monday in the Middle 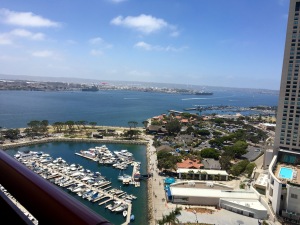 Continuing with the RWA16 photo share…these two photos show different views of the same…view. 😆 This one is a day-time view from my balcony. The area down below, beyond the marina, is called Seaport Village, a collection of shops and restaurants situated in historic buildings. Click HERE if you’re interested in checking out the coolness.

So…There was a weekend. I worked. Due to circumstances and on account of because, I had to rewrite the last 50 pages of DOUBLE TROUBLE. It has to be ready to upload by August 19th. This is me doing a giant *FLAIL*. I lost the black moment between the H/H. I lost the moment the hero faced his doubts. I lost the moment when the heroine realized her feelings for him. So…yeah. Had to restructure. And something interesting happened. A different story emerged and one that I think I like even more than the original. The rewrite pretty much occupied my whole weekend. I caught a little of the Olympics, some baseball, and lots of background TV noise.

I also read. I finished Michelle Sagara’s CAST IN HONOR, the most current book in her Chronicles of Elantra series. The next one, CAST IN FLIGHT comes out in…November? Then I got around to reading Nalini Singh’s ALLEGIANCE OF HONOR. This was my weekend for honor reads. 😆 Totally enjoyed catching up with almost all the characters from the Psy-Changling series. Now I’m doing a “listen” of Jeaniene Frost’s Night Prince series, starting with ONCE BURNED. Fun times! 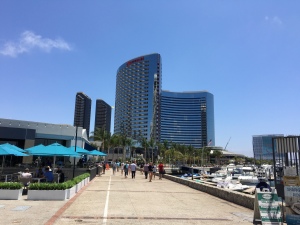 So that was my weekend. More or less. And this one is the view from the edge of Seaside Village, looking back at the hotel. My room was up there on the 22nd floor about five balconies in. What did y’all do this weekend? What’s on tap for your week?

I like walks on the wild side and coffee. Lots of coffee. Warning: My Muse runs with scissors. Author of several award-winning series--Moonstruck, Nightriders MC, The Penumbra Papers, and Red Dirt Royalty (Harlequin Desire) & other books! Purveyor of magic, mystery, mayhem and romance. Lots and lots of romance.
View all posts by Silver James →
This entry was posted in Writing Life and tagged books, Double Trouble, follow up, Monday, pics, reading, RWA16, writing. Bookmark the permalink.

4 Responses to Monday in the Middle