Tuesday Titles: Redeemed by the Cowgirl 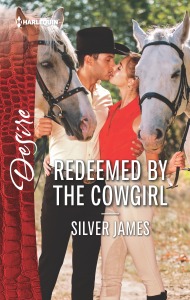 I am very pleased to reveal the cover and teaser for the next Red Dirt Royalty book. This is the book a lot of fans have been waiting for. Readers hate Cash almost as much as they despise Cyrus Barron. This is a pivotal book in the series…y’all will find out who Cash really is deep inside, and why he does what he does. The ebook releases on my birthday, March 1, and the paperback version comes out a week later on March 7th.

Everything he does is for family—including moving in with a woman he can’t trust…
Cash Barron has always been the good son, protecting his father’s billion-dollar empire. So when grifters target Barron Enterprises, Cash focuses on the femme fatale of the bunch. To keep tabs on Roxanne Rowland, he’ll move her into his luxury condo. And one step closer to his bed…

But Roxie is innocent—just a pawn in her family’s criminal game. Worse still, she’s long had a crush on ruthless Cash. So can Roxie find the chink in his armor and redeem this hard-hearted, hard-muscled man?
***

I can promise you will laugh–hey, Roxie owns a Newfoundland named Harley, what can I say?–and I’ll bet dollars to donuts you sniffle a time or two when you read this book. It’s up for preorder now at almost all on-line retailers. Go snag your copy! You know you want to! 😀

8 Responses to Tuesday Titles: Redeemed by the Cowgirl