Wednesday Words: A Time for Thanks 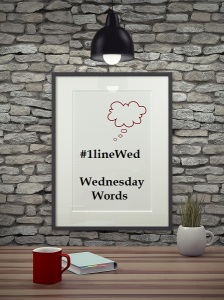 On this Thanksgiving Eve, this week’s #1lineWed theme of **THANKS/BOUNTY/HARVEST** is in keeping with the holiday. Of course, writers could take that in different directions with a “no thanks,” bounty hunters, and I’ll just leave “harvest” up to the horror fans. *bwahahaha* I’m going with the more traditional meanings. If I’ve shared this snippet before, sorry. It’s been a long time since I started this book. Anyway, this is the first meeting for Tucker and Zoe. On the side of the road, having blown either the radiator or the engine of a classic Trans Am. Just sayin’… 😉

****
Someone cleared his throat and Zoe jumped. She whirled to face the stranger she’d passed on the road. Oh, good lordy, why was she being so sorely tested? This man was…gorgeous. Standing there like the cover on one of those magazines in the grocery store checkout line. He was tall—towering at least a foot over her. His dark hair was short, cropped almost like a soldiers but had way more style. He looked perfect, unlike those narrow-between-the-eyes hillbillies with their shaggy pelts and beards and who would be on her trail all too soon. She refocused her attention on the intruder. Eyes the color of cornflowers crinkled in amusement. And his mouth. She could kiss that mouth for days and never need to come up for air. In other words, he was trouble in spades as he stood there in those tight blue jeans that hugged him like a jealous lover.

“Having a little car trouble?”

“Ya think?” She snapped at him and didn’t know what to do when he grinned at her.

“I’m a man. We’re masters of the understatement.” He eyed the beast, his expression dubious. “Need a lift?”

“Uh huh. Sugar, I think you blew the engine. This bird isn’t going to fly any time in the near future.” He gave her the once over and she felt—actually felt his gaze touch her. She shivered inside. Guy-dar. On the fritz, she reminded herself sternly. She’d hitched the ball-gown skirt of the wedding dress up around her middle, which bared her legs. They might be short but she’d never had a man complain.

The dude cleared his throat. “So, sugar, want me to call a tow truck for your car?”

“No.” In truth it wasn’t her car. She didn’t give a flip if it sat here on the edge of the road from now until the day after the end of the world.

“Look, this is the back of beyond. Let me at least give you a lift to the next town.”

“I’m not goin’ to the next town. I’m headed to Nashville.”

And that was the whole problem. She wanted him to take her. He was still looking her up and down, interest sparking in those too-blue-to-be-safe eyes of his, and dang if her own bits weren’t checking him out and hoping for a cave man. Ugh. What was wrong with her?

“All the way to Nashville?” That would give her a big head start on the Smithees. Red was in prison down in Alabama. Norbert couldn’t find his way out of a plastic bag and the other Smithee brothers and cousins were like ants running in circles because a mean little kid poked their hill with a stick.

“All the way.” He held up his phone, and his brows creased in a cute way that made her want to kiss his forehead. Whoa, girl, she chided herself. This whole Handsome Man Syndrome was what landed her in this mess to begin with. “Huh. No bars. I’ll call a wrecker when we hit civilization.”

Zoe leaned in through the door and grabbed her duffel bag and guitar case. Everything she owned fit in both. “Fine. Let’s go.” She marched past him and got jerked to a stop when he snagged her bag.

“I’ll put these in the trunk. The ’bird doesn’t have a back seat.”

Well, that was a relief. Back seats were only good for the devil’s work. No matter how much fun that work might be. While the man deposited all her worldly goods into the minuscule trunk, she stomped to the passenger side door and snorted when she saw her veil crumpled there. Bad Karma. Definitely. Zoe stuffed the ugly thing onto the dashboard and did her best to maneuver into the seat. Nothing worked.

She startled and banged her shin on the car door. Dang but the man was sneaky. She’d need to remember that fact. “No, I’m good. Thanks, kindly.”

He stood back, arms folded across a chest that filled out his crisp button down shirt as well as his butt did those jeans. He’d rolled the sleeves up to reveal tan forearms sprinkled with dark hair that glinted copper under the sun. Nope. He was not sexy. He was a man and they were on her Not-To-Do list at the moment. With much huffing and puffing, she squirmed her way into the tight fit. Between the hideous excuse for a wedding dress and everything else, she’d need a forklift to get her out of the darn thing.
****
Tucker will eventually be thankful for this runaway bride. And Zoe will be thankful that Tucker stopped to give her a ride. What are you thankful for this Thanksgiving season?

I like walks on the wild side and coffee. Lots of coffee. Warning: My Muse runs with scissors. Author of several award-winning series--Moonstruck, Nightriders MC, The Penumbra Papers, and Red Dirt Royalty (Harlequin Desire) & other books! Purveyor of magic, mystery, mayhem and romance. Lots and lots of romance.
View all posts by Silver James →
This entry was posted in Writing Life and tagged #1lineWed, inspiration, quotes, Red Dirt Royalty, series, snippet, Wednesday Words, WIPs, writing. Bookmark the permalink.

2 Responses to Wednesday Words: A Time for Thanks