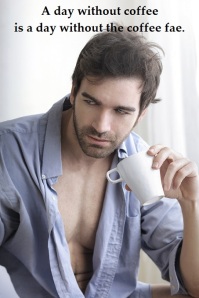 I’m late posting today. I normally set up a post the day/night before. Sunday was mostly internet free but better late than never, right? Right! So here, have a little coffee fae to make your morning better.

Weekend…OKRWA went well. I think people enjoyed my class on worldbuilding and in the morning session on setting up an spreadsheet to track income and expenses for tax purposes, I learned something about Excel I didn’t know. So yay! I also got an email saying my proposal for a panel at RWA Nationals was accepted so I’ll be a presenter in July. That marks off another item on my bucket list! Double YAY!

Lawyer guy has the flu and and is really sick. Boo on that! If he’s not better today, he’d better get his sick @$$ to the doctor. Just sayin’.

I got caught up on Season 3 of LOST GIRL (SyFy) and watched the premier of Season 4. I do love me some Dyson, the fae werewolf in the show. Bo, the fae succubus and lead character, had some big changes in her life last season. She went through the “dawning”, which is like the fae version of puberty/vision quest/survival test. A new character, a Valkyrie was introduced, and the mystery of Bo’s father was interwoven with the season and that’s the big carry-over thread to the new season.

Reading. Yes. My RITA books for judging arrived. Can’t talk about them, but I have 8 to read in the next month. At the same time, the library pinged me to say that Jayne Ann Krentz’s RIVER ROAD was ready for digital checkout. Reading it now. I’m withholding judgement until I’ve finished. This is her first “straight” romantic suspense in awhile.

That was my weekend. What did y’all do?

I like walks on the wild side and coffee. Lots of coffee. Warning: My Muse runs with scissors. Author of several award-winning series--Moonstruck, Nightriders MC, The Penumbra Papers, and Red Dirt Royalty (Harlequin Desire) & other books! Purveyor of magic, mystery, mayhem and romance. Lots and lots of romance.
View all posts by Silver James →
This entry was posted in Writing Life and tagged books, bucket list, coffee, family, lolpic, Monday, OKRWA, reading, TV. Bookmark the permalink.