Okay, y’all! Get your fans out, crank up the AC and buckle up. Today’s short snippet is definitely NSFW so be warned because Holy Hotness! Today’s guest contributor, USA Today best-selling author MJ Nighingale, is truly bringing the heat! Of course, Angel Murphy is a firefighter so he can handle it and I’m betting he knows what to do if Jemma combusts!
****
When he parted his lips, she tentatively darted her tongue into his mouth. He captured it with his teeth before he allowed her further entry. Then he let her in. Her stomach tightened as she stroked his tongue with her own and felt a deep heat engulf her core. When his hands gripped her arms, and she felt the powerful man under her shudder while she kissed him, it emboldened her further. She needed, no, yearned, to be closer to him. She swung her legs over his body and got onto her knees, placing one on each side of his lean hips so that she half lay astride him. The connection was intimate, and she could feel him grow hard at her apex where their bodies touched through their jeans. His erection against her femininity, even through her clothes, made her body come alive. She thought the position would ease some of the ache inside her, but it only made it worse. She gently pushed against him, and they both groaned in unison at the pleasure that pressure created.
**** 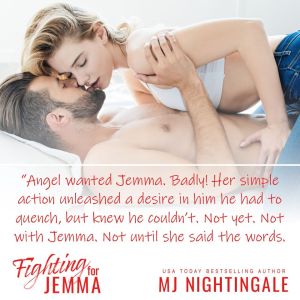 If you haven’t already, go pre-order FIGHTING FOR GEMMA by clicking on the cover, the teaser meme or the cover! Want more info? Here’s the book’s blurb to further entice you. 😉

High school science teacher Jemma Haner is ready for love, but she doesn’t do firefighters. Period. Never. No way. But Angel is everything she is looking for. Tall, dark, handsome and kind. As a veterinarian he shares her love of animals, nature, and the outdoors. She’d been burned in the past and had lost too much already to risk her heart to a firefighter.

Angel, “Short Shit” to his friends with the Tarpley Volunteer Fire department, can rescue cats and kids out of trees without a ladder. He works hard and loves harder, but when he meets Jemma he thinks only of making her his. Only problem–she won’t date firefighters. Can he get her to change her mind and give love a chance? Can he win her heart?

And when the storm of the century hits Tarpley, Texas, can Angel save Jemma from the dangers that come at her from all sides, and still do the job he loves? Find out in Book 4 of TVFD, part of Susan Stoker’s Badge of Honor series.

Is anyone emboldened to share some words today? Be bold and go for it! (And they don’t have to be sexy. 😉 )